After 12 generations and 55 years of production, the 50-millionth Corolla has been sold, marking a major milestone for not only Toyota but the automotive industry as a whole. Introduced to the U.S. in the spring of ‘68, the Toyota Corolla was relatively unknown to American consumers but quickly grew to be the world’s top-selling car. Known for its reliability, the Corolla earned the trust and confidence of its owners, slowly forming a long list of lifelong followers with every car sold.

With the first Corolla rolling onto U.S. shores in 1968, Toyota immediately began to make a name for themselves amongst automakers. The first-generation Corolla was a simple, clean, yet refined design, available in coupe, four-door sedan, and two-door wagon models, with its reliability, truly paving the way to popularity. Experiencing immediate success in the U.S. market, Corolla quickly became the poster child for value and reliability in its class, while also growing to be one of Toyota’s biggest assets.

Following the massive success of the first-generation Corolla, Toyota continued with the Corolla name and has produced over 50 years’ worth of ultra-reliable vehicles. Offering more comfort, convenience, and performance with each new generation, the Corolla further solidified itself as one of the best value and most reliable vehicles in existence. Such value, performance, and safety are hard to resist, resulting in millions of Corolla owners, spanning multiple generations of a family.

As sales continued to soar, the 1973 Oil Embargo was enacted and resulted in a major fuel crisis with long lines and sky-high prices at the pump. Fuel became so expensive that fuel rationing had to be put into effect, casting fear and doubt in millions. That fear and doubt led those millions to the Corolla and its fantastic fuel efficiency, further popularizing the Corolla and carrying Toyota even closer to the top.

In the mid-80s Toyota sales had skyrocketed due to their heroic performance during the Oil Embargo, leading Toyota to build a U.S. plant for Corollas. This move to the U.S. not only increased vehicle reliability, but consumer confidence as well because Americans love anything made in the United States. With such success in producing vehicles in the U.S. Toyota has continued to manufacture vehicles there, opening up the Toyota Motor Manufacturing Mississippi, Inc. (TMMS) in 2011 which is home to Corolla production. Recently Toyota has even joined forces with Mazda and built a manufacturing plant in Huntsville, Alabama which will be the home of the all-new Toyota Corolla Cross, Toyota’s all-new crossover SUV.

After over 50 years and 50 million Corollas sold, Toyota isn’t ready to stop there. With big plans for future generations of Corolla, Toyota is sure to stay at the top of its class as it plans to continue pumping out the ultra-reliable Corolla. As mentioned, for 2022 Toyota will be releasing the Corolla Cross, a highly anticipated crossover SUV that is sure to dominate its market. The Corolla lineup is a proud family of vehicles, boasting a variety of models including sedans, a hot hatchback, hybrids, and the upcoming Corolla Cross.

Seeing its latest refresh in 2019, the Corolla is ready to keep delighting families and making memories by offering updated models to fit the modern customer. Reviving the hatchback, the 2019 refresh of the Corolla was a huge hit among Toyota enthusiasts and even earned newly loyal fans. It’s no secret that in modern times Toyota continues to be a leader and innovator, with generations of loyal customers clinging on to their every move.

Not ready to stop at 50 million Corollas sold, Toyota has its sights set on the future, aiming to put even more cars in America’s driveways as the years go on. Toyota is a leader in offering stylish, safe, efficient, and dependable vehicles that are ready to help write endless chapters in your adventure story. With the Corolla Cross coming in 2022, Toyota is ready yet again to shake up the automotive industry and forge new precedents with its foray into small compact crossover SUVs that are affordable.

As Toyota continues to make cars, they want to take time to reflect upon the journey and thank their millions of customers. With 50 million Corollas sold, Toyota is ready to carry on into the future, making memories and traveling millions of miles along the way. Become a part of the Toyota family today, stop in at Lithia Toyota of Abilene to check out our fantastic selection of Corollas and other Toyota models. Everyone has a Corolla story, what’s yours? Share your Corolla story by using #MyCorollaStory on your social media. 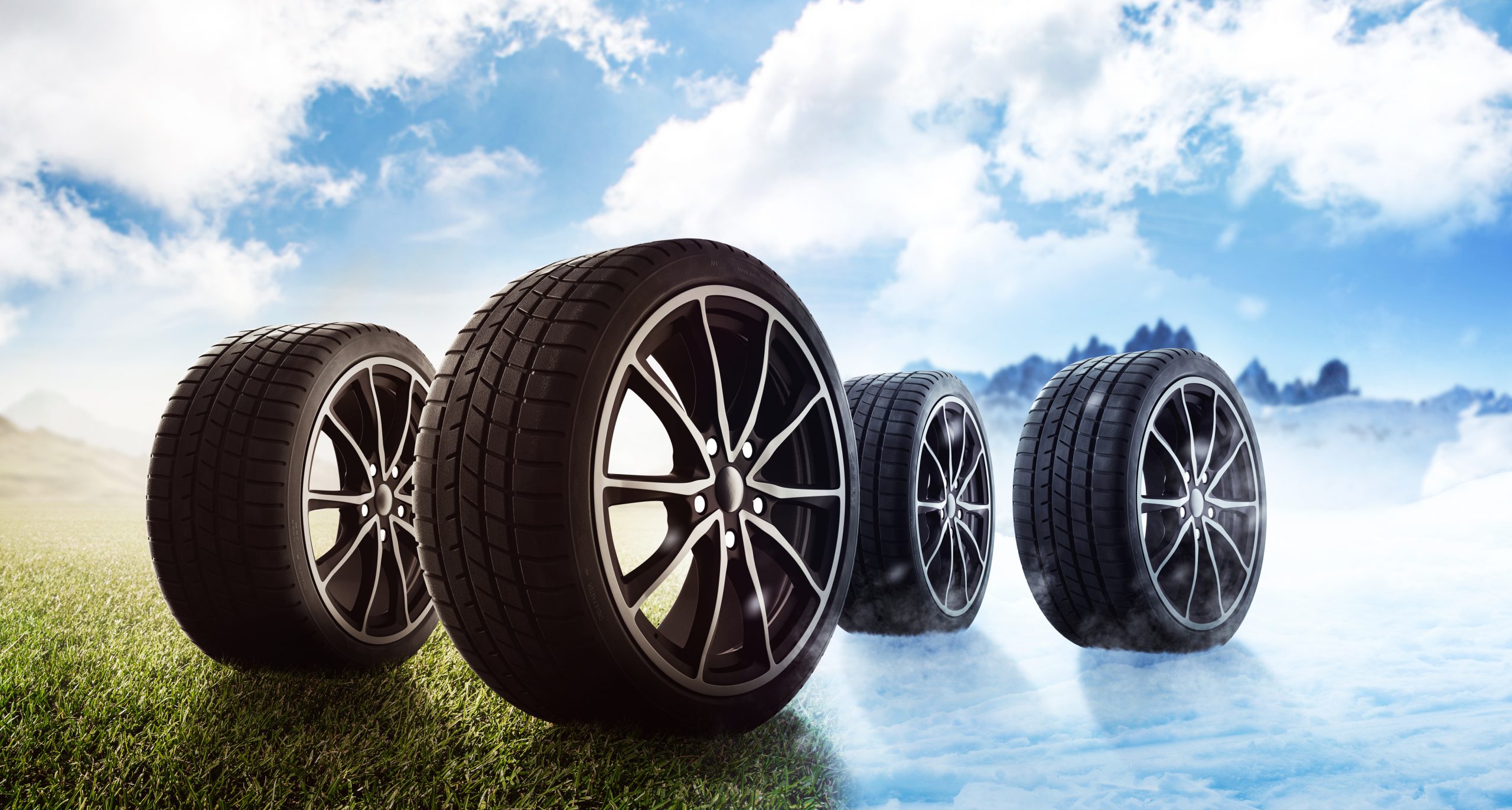 At the Tire Shop

It’s 4pm on a Friday afternoon and you’re in line at the tire shop anxiously awaiting the enormous bill that you’re about to incur. “Next!” yells out the middle-aged service writer, motioning from amongst a whirlwind of paperwork, for you to come to the counter. At the counter you tell the service writer that you need four new tires and he asks you “Summer, winter, all-season?” and it dawns on you at that moment that you’re totally unprepared for this question. “There’s a difference in tires?” you think to yourself, and your mind begins to wonder how you’ve gone so long not knowing there were different tires, let alone what those differences are. Being in a position like this isn’t all that uncommon, unless you’re a car enthusiast or a mechanic yourself, chances are you were never told about the differences in tire compounds and why there is even a need for different tires. They say you learn something new every day, and today’s lesson is on the various tire compounds and their specific uses, so buckle in and come along for the ride.

Both the summer and winter are filled with their own unique wonders and magical times, but also filled with their own unique challenges at the same time. Winter can be cold, harsh, and unforgiving, both to humans and machines alike. While the summer may not come with ice and snow like winter, it can still be host to poor or dangerous driving conditions just like winter is. With the winter and summer being total opposites, it makes sense that there isn’t just one tire to handle both seasons. Tire manufacturers nowadays have tire offerings in three different categories, Summer, Winter and All-Season, each boasting their own advantages and disadvantages. Now you may be wondering, why not just buy all-season tires for all the seasons? Stick around and read about why all-season tires aren’t necessarily for all of the seasons, and why winter tires should be kept to colder temperatures.

Summer tires are excellent dry and wet condition tires in warmer weather, making them perfectly suited for rainy summer evenings and sweltering hot afternoons. In order to gain superior traction and handling that summer tires are known for, they were designed with less grooving for water clearance and even have a more streamlined tread pattern which increases the amount of tire in contact with the road, ultimately providing better traction. On top of the increased traction and handling, summer tires also boast better fuel economy due to their reduced rolling resistance. While summer tires are great because of their increased traction and handling, the technology used to achieve those results ends up being detrimental to the car and driver if driven in cold weather conditions. Because of the summer tires’ streamlined tread design, they become much more brittle in cold weather and therefore are considered unsafe in winter driving conditions. Purchase your summer tires and have them mounted and balanced at Lithia Toyota of Abilene located in Abilene, TX, then hit the roads in confidence with your new tires.

Cold weather brings a plethora of problems, from snowfall shutting down roads to black ice causing accidents, the winter is no joke. That is why it’s imperative to head into every winter prepared for the challenges the cold weather forces you to encounter daily. One way to fight back against the cold, cruel beast that is winter is with winter tires. Winter tires are designed with more natural rubber in the tire compound, allowing the tire to maintain flexibility even in temperatures below freezing. In addition to the unique rubber compounding, winter tires boast more aggressive tread patterns that help dig into the snow and ice, providing traction and handling without having to stud the tire. While winter tires are great in cold weather, it’s not a great idea to keep them on during the warmer months as the softer rubber compound will cause accelerated wear and tear of the tire and pose handling and traction issues as well. After running winter tires during the cold weather months, make sure to switch off to a good summer tire or a set of all-season tires. Before winter sneaks up on you, make sure to drop by Lithia Toyota of Abilene Service Center to get your winter tires and winter car servicing.

All-season tires means they can be used in all seasons right? Unfortunately, that is a common misconception amongst drivers today, with most drivers believing they can run one set of all-season tires year-round with no issues. While all-season tires sound like they can do it all, they really just excel at being mediocre in all seasons. With winter tires sporting extra rubber to maintain a softer compound for the cold weather conditions, and summer tires boasting a stiffer tire that provides better traction in warm weather, all-seasons take a bit of inspiration from both which results in a hybridized version of summer and winter tires. All-season tires sacrifice a bit of the warm and wet weather traction in favor of being able to grip in ice and snow, making them a great choice for those that live in climates that don’t drop below freezing often or if at all. The true way to determine if an all-season tire is the right tire for you is to base it off of your local climate, a very neutral climate area is the best place to use all-season tires in. If you’re looking for a great middle ground between summer and winter tires, purchasing all-season tires at Lithia Toyota of Abilene is a great option.

Which Tire is Best for Me?

Choosing a tire seemed simple before all of this info, right? While there are many factors that go into purchasing a tire, you don’t have to be an expert to make a choice, as our parts experts at Lithia Toyota of Abilene will guide you in choosing the right tire for your vehicle. In order to make it a little easier to select a tire, consider your climate and daily driving conditions first, then make sure to stop by Lithia Toyota of Abilene to speak with a parts professional and order your tires today!